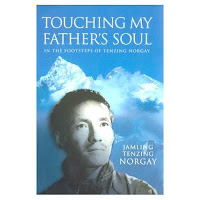 Touching My Father’s Soul: In the Footsteps of Sherpa Tenzing


Ostensibly a record of Jamling Norgay’s successful Everest expedition with the IMAX team in 1996, Touching My Father’s Soul is much more than this. It is a deeply thoughtful autobiographical account of the journey of personal development of a young Sherpa man struggling to find his identity in the complexity of the modern world and the long shadows of his father’s greatness.

Norgay, the fourth of six children, was born in Darjeeling and educated there at an elite private school, Saint Paul’s, before studying at Northland College in Wisconsin. At age 17, he had ambitious plans to become the youngest ever man to climb Everest with an Indian expedition team, but his father, a distant and often absent figure in his life, refused him. Norgay's appetite to emulate Tenzing continued unabated however, and in 1995 he agreed to join David Breashears and his team in their extraordinary bid to record an Everest expedition through an IMAX camera lens, for production of the film Everest.

The story of the expedition is cleverly interwoven with anecdotes and narrative of the 1953 climb, offering readers a useful insight into the ways in which climbing has changed over the years. The contrast is a stark one, from the technological advances in equipment (the front-end crampons, the lightweight refillable oxygen bottles, aluminium ladders, navigational equipment, etc.), to the number of camps placed (nine then, compared to four now), to the sheer uncertainty of route and terrain faced by his father and Sir Edmund Hillary. If proof were needed that modernity has not tamed the mountain, however, it came with the storm of May 10, 1996, which famously trapped and killed eight members of the preceding expedition teams. The events of the tragedy are vividly recalled by Norgay, who witnessed them by telescope and radio from Base Camp. While avoiding casting blame, Norgay notes that the storm itself was only a part of the reason for the disaster, compounding mistakes already made by the expedition teams, resulting in part from the pressure on commercial expeditions and individual egos and emotions. Throughout the book, he stresses the importance of approaching Everest with humility, respect and patience. “My father knew before he ever set foot on the mountain that it had to be approached with respect and with love, the way a child climbs into the lap of its mother. Anyone who attacks the peak with aggression, like a soldier doing battle, will lose.”

The historical perspective of the book also provides a contrast of the Nepal of 1953 and today, in particular the effect of modernisation on the Sherpa culture and people. Norgay, somewhat generously perhaps, does not lay blame for the erosion of Sherpa traditions with foreign visitors per se, but rather on the failure of the Nepalese government to use the moneys generated by climbing royalty fees to invest in social projects in the Sherpa communities, and on the emergence of new cultural reference points in the form of Asian satellite television, the Hindi cinema and the distractions of Kathmandu. Indeed, Norgay argues that foreign visitors (“Mikaru” or “white eyes”, to the Sherpas) and the influx of capital over the past fifty years have in some ways helped preserve Sherpa heritage, for example in areas such as Khumbu, where monasteries have flourished as a result of Sherpa families being able to afford to send one of their sons (usually, the third) to become a monk. He credits too the work of the Himalayan Trust in the building of the Khumjung School and argues that the key to the protection of the Sherpa way of life is to provide the Sherpa communities with the quality schools needed to avoid the rush to Kathmandu and abroad for education and opportunity.

Perhaps most interestingly, the book describes the highly ritualistic and spiritual manner of the Sherpas, reflected both in their everyday lives and in their approach to Everest (or “Chomolongma”, to the Sherpas): from the lighting of butter lamps at the Great Stupa of Boudhanath, the spinning of prayer wheels at the Dwoche monastery, the prayers, meditation and chanting of the puja ceremonies at Base Camp, to the stringing of prayer flags at the summit and the special cremation ceremonies for the dead at Chukpö Laré. Norgay admits his initial mixture of curiosity and scepticism towards these rituals, and of his uncertain faith in the Buddhist deities, in particular Miyolangsangma, the goddess of Everest and one of the Five Long-Life Sisters who reside in the Himalaya. In the book, Norgay recalls, however, that as the expedition progressed and as the team in particular confronted the horrors of the May 10 tragedy, his faith strengthened enormously. “[O]nce I arrived in the lap of the mountain, surrounded by Sherpas who believed, and confronted by a rich history of death – and death itself – I could no longer remain cynical.”

The book records how, with each step up the mountain, Norgay found that the Buddhist teachings he had learnt as a child, in particular their simplicity and focus on the essential elements of life, seemed to make sense. “One reason why people go into the mountains is to experience the purity of these elements – these goddesses – in their unobstructed form. In the mountains, worldly attachments are left behind and in the absence of material distractions, we are opened up to spiritual thought.” The expedition opened Norgay to a spirituality he had lost in his Western education and childhood. He recalled with some pride how his mother, when she travelled to the U.S. with Tenzing, would sit outside the hotels they stayed at and sell her Himalayan trinkets to passers by, and clearly felt the need not just to connect with his family roots but to embrace his faith and find the peace of mind that she had attained through her Buddhism and the compassionate works she did in their community.

The expedition also allowed Norgay to understand what had led Tenzing to Everest, and to gain a sense of connection he never had while his father was alive. In the book, he describes the feeling of “walking on Tenzing’s back”, seeing what his father saw and understanding what he must have experienced back in 1953. Norgay felt the force and spirit of his father guiding him up the mountain and recalls seeing a vision of him at the summit and speaking to him for the last time. It was only then that he was able to emerge from Tenzing’s shadows. “Stepping on the summit of Everest freed me from the confinement of my ambitions. And it freed me from following my father, from searching for him.” Finding his father and finding his faith “launched me”, Norgay writes, “onto my own path.”

As great an achievement as it was to reach the summit in 1996 with the IMAX team and record the astonishing footage captured at the roof of the world, the book explains that, for Norgay, the expedition was ultimately a means to an end. What was to most climbers a physical challenge, a rock to be conquered, had become for him a “pilgrimage to Miyolangsangma”; a journey of enlightenment that led to a sense of freedom and self-identification for the first time in his life.

Today, Norgay works with the American Himalayan Foundation, a nonprofit organisation based in San Francisco and Kathmandu, dedicated to improving conditions in Sherpa communities through grass roots social projects. In the last chapter of his book, Norgay laments thus: “Thousands of people visit the Himalaya each year, and hundreds promise to help the local people. But only a few of them actually return to do something.” This is no doubt true, and a sad reflection of the fleeting charitable interests of modern tourists and travellers. Fortunately, this cannot be said of the Everest Test 2009. Whatever else happens on the trip, members of the Everest Test expedition can take pride in the knowledge that they will be doing something to help, whether or not they return.

This blog a personal diary of my journey to Everest. Hopefully, I will find the time to include on here some anecdotes of our fundraising antics and other amusing stories of our preparation, but there will be many more entertaining blogs from other members of the expedition squad, details of which I'll post in due course. The main purpose of my blog will be to explore the academic and philosophical side of the expedition through reviews of important books on Nepal, Everest and Sherpa culture.

For those wanting to learn more about the expedition, how to donate to the good causes or get involved, please visit: http://www.theeveresttest.com/.

Thanks,
Haydn
Posted by Haydn Main at 07:44 No comments: