Hookers in the mud

Yesterday was my debut appearance for Drovers CC (http://www.droverscc.com/), in a Twenty20 match against the Happy Hookers CC in Kingston.

Things got off to a poor start as I realised I'd left my spikes at home; a school boy error in the circumstances, those being torrential rain and an uncovered pitch. The rest of the Drovers coped fairly well, however, and, in this Somme-like reenactment, G-man delivered the early wickets and the team spirit was high. But mistakes, including a woeful dropped catch by yours truly at deep midwicket off the none too pleased Cuzza (unmoved by my claim to have lost it in the air), took their toll and the Hookers finished with a decent 226.

Batting at three, surely there was time for a between-innings shandy, I mused, as I wandered back to the pavilion (/ tree, park bench), but before I'd finished tightening the laces on my slicks, Ed had fallen for a golden duck and I was back out in the middle. With Hillsy out almost next ball to an outrageous inswinger, we were looking shaky and I needed to take charge. After a comfortable three off two balls, this seemed possible and Charlie B and I felt confident we could man the trenches for some time. But a quick single called by my brave comrade was our downfall; something I realised when we passed each other barely three feet outside my crease, as I ran on the spot in cartoon fashion. The ensuing direct hit was unfortunate, and even our team mate Cuzza at square leg umpire couldn't swing that one for me. It was '3 run out' on the score card. Not quite the ship-steadying performance I had in mind.

Brave batting by our lower order almost clawed the game back, but our comically bad start to the innings had cost us the match and we fell to the Hookers with two overs to spare. The last game of the season for the Drovers, but not for the Everest Test. Tenzing and Hillary will be battling it out in a warm-up match on September 27th at Sheen Park.

Blood Against the Snows 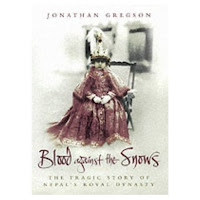 Blood Against the Snows: The Tragic Story of Nepal’s Royal Dynasty


The mystique of the crown and the loyalty it commanded among ordinary Nepalese had firstly to do with the association of the Shah dynasty and the nation state itself. Prithvi Narayan Shah, the Gorkha raja and first Shah king (Mahārājdhirāja), who had formed the state of Nepal by his conquests of the Malla Kings of the Kathmandu Valley in the late 18th century, had actively worked to promote the concept of nationhood to a territory which, while ruled centrally from his time onward, was and remains a land of unrivalled ethnic, religious and cultural diversity. So it was that the linkage of the Shahs and the state of Nepal became entrenched. Second, and more importantly, the Shahs were no ordinary kings, nor even kings chosen by God (as in Europe and elsewhere), but were considered to be partial reincarnations of Lord Vishnu (the preserver and protector of the universe). The Shahs were truly god-kings to their people, a status that enhanced any claim they might make to absolute rule.

In Blood Against the Snows, Jonathan Gregson, a respected commentator on the Himalayan region and the only foreigner to have interviewed King Bidendra Shah, seeks to tell the story of the Shah dynasty and in particular to explain how a monarchy with such apparently strong foundations managed almost nothing but survival during its tenure.

One key structural weakness in the crown was the strict form of primogeniture established by Narayan Shah. This brought about successive kings too young to govern which, combined with the absolute power of the crown (breeding temptation in others), the lack of established precedent (by virtue of the newness of the institution) and the general instability of the country (one without even stable borders), gave rise to a “a political culture based on fear and self-interest… that was to have grave consequences for future kings of Nepal.” The massacre of 2001, a tragedy without question, was but a reflection of the far more turbulent and bloody years of the 19th century during which factionalism and intrigue led to sporadic but regular assassinations of nobility, court staff and royal relatives, enforced sati (the suicide of a wife, and often her maids, on the funeral pyre of her husband) and the regular exiling and imprisonment of political opponents. Hundreds of lives were lost. Gregson writes that: “Not in the goriest of Jacobean tragedies does one encounter so many futile deaths.”

Ironically, what saved the crown then, as in the early 1990s with the Spring Awakening, was the emergence of powers that forced the Shah kings into conceding political authority. Throughout their 240-year reign and whatever the political compromises of the day, the Shah kings, almost without exception, showed a clear preference for maintaining total political control over Nepal, to the exclusion of all others. And yet, as Gregson points out, the dynasty was always at its strongest the less power it had and the less influence it exercised. In times of apparent weakness, “the absence of responsibility contributed to the popularity of Nepal’s monarchy”, because the king “could not be blamed when things went wrong.” Given the appalling poverty and squalid social conditions of the peasant masses, contrasted with the corruption and wealth of the ruling elites, distance from the people and their problems was a matter of necessity.

True to its early history, the Shah dynasty was ultimately dealt its strongest blow from within, with the massacre by Crown Prince Dipendra – then first in line to the throne – of ten members of the royal family, including King Bidendra Shah. “Imagine”, Gregson writes, “it happening in Britain: Prince Charles would have had to shoot dead Queen Elizabeth and Prince Philip, his brothers Edward and Andrew, Princess Anne, his own sons William and Harry and, to end it all, himself, leaving only (at that time) his aunt, Princess Margaret, to assume the throne.” These events, which took place on a single night in the grounds of the royal palace in April 2001, were caused primarily by the deep frustrations of the Crown Prince at the unwillingness of King Bidendra Shah and, to a larger extent Queen Aishwarya, to permit him to marry his love, Devyani Rana. Dipendra was a young man of Western education and broad cultural experience who was trapped in the bizarre “Alice in Wonderland” world of the palace and the antiquarian rules of the court. His actions were likely fuelled in part by alcohol and drug consumption, but the reason for the extent of the killing spree is unclear and Nepal remains rife with conspiracy theories as to the killer’s motives and identity. Whatever the truth, this was, as Gregson notes, “the bloodiest, the most complete massacre of any royal family ever recorded” and an unimaginable loss to the Nepalese people.

As of 2001, fifty years after it had opened up to the outside world, Nepal was in crisis. To ordinary Nepalese, “the royal family’s self-destruction was a symptom of a broader malaise affecting the entire nation”; a theme pushed successfully by the Maoist insurgents, whose agenda of social and economic development was finding resonance in rural areas. In a modern era of instant communication, press coverage, diplomacy and popular politics, maintaining a king above the law and in control of the army was becoming increasingly difficult. So too the magic of the crown was slipping and the king’s status as a deity in the eyes of the public could no longer be taken for granted, not least for a man such as Gyanendra, who took the throne through the junior (cadet) line of succession. The monarchy was fighting for survival. And yet, as with almost all Shah kings before him, Gyanendra’s instinct was to consolidate power in the crown. He simply could not cast off the “culture of absolutism that had supported the family for so long”. The historic lessons of disentanglement from politics – of freedom from responsibility and blame – were ignored. Under pressure from his own and foreign governments (the U.S. had, after 9/11, branded the Maoist rebels a “terrorist group”), Gyanendra went into bat for the establishment against the Maoists, ordering the Royal Nepal Army to move against them.

Of Gyanendra’s decision to side with the government, Gregson argues that this strategy would be an all or nothing one: “If the Maoist insurgency is quashed and there are signs of real progress in Nepal, its monarchy will endure. If not, King Gyanendra’s willingness to take up the challenge means that Nepal will not be a Kingdom for much longer.” Written in 2002, this was prescient commentary. Gyanendra went even further than expected and assumed all powers of government and after years of sporadic but intense fighting a ceasefire ensued in which Gyanendra surrendered power to a reinstated parliament in which the Maoists would later form the largest group. True to its manifesto, a bill for the abolition of the monarchy was duly passed and on May 28, 2008 the 240-year old Shah dynasty came to an end. Nepal was now a secular federal republic and Gyanendra was given 15 days to leave the palace. He did so on June 11, 2008.

Nepal’s political situation remains precarious during this interim two-year period while the constitution is rewritten, but the country is largely peaceful for the time being at least. Time will tell if it can heal and the world watches in hope that the government can deliver on the promise of social and economic development that has been made and broken so many times in the past. In the meantime, the work of charitable organizations such as the Himalayan Trust UK remains as crucial as ever.